Nipah Virus: How is it transmitted and what are the symptoms

Nipah virus: How is it transmitted and what are the symptoms.

A recent report by the Access to Medicine Foundation warned that an outbreak of the Nipah virus in China could potentially be the next big pandemic risk.

Nipah is a virus with a fatality rate of up to 75 percent. It can be transmitted to people from animals and through contaminated food and produce, according to the World Health Organization (WHO). The deadly virus can also be transmitted from person-to-person.

The virus, also known as NiV, can spread to humans through “direct contact with infected animals such as bats or pigs, or their body fluids,” including blood, urine or saliva, according to the Centers for Disease Control and Prevention (CDC).

Close contact with infected pigs was the probable cause of the first known outbreak, the CDC said. The strain identified in the first outbreak was believed to have spread from bats to pigs which then spread within pig populations.

READ:  Biden to ask Americans to wear masks for 100 days

“People who worked closely with infected pigs began falling ill,” the CDC said, adding that “no person-to-person [cases] were reported in that outbreak.” 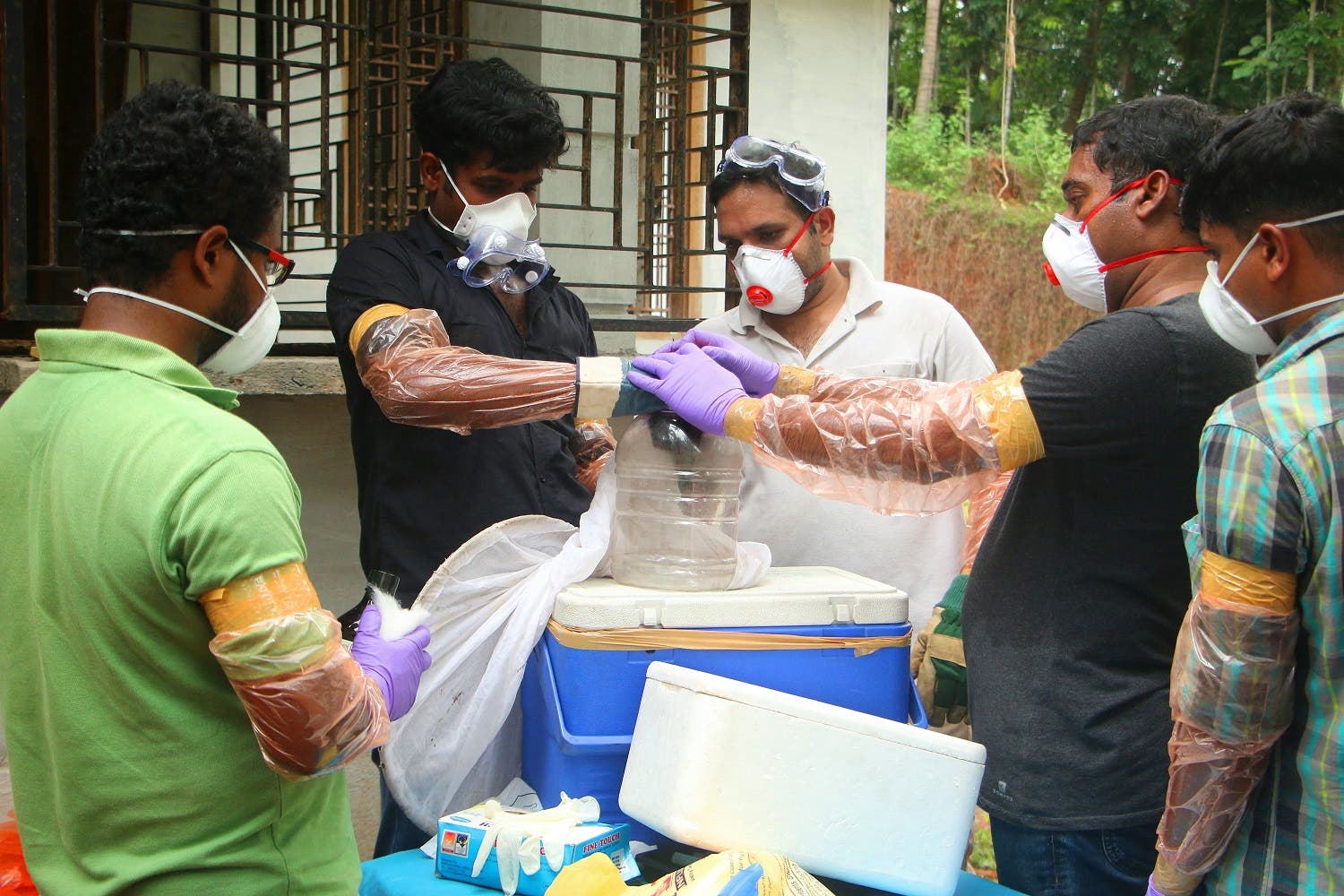 Animal Husbandry department and Forest officials deposit a bat into a container after catching it inside a well at Changaroth in Kozhikode, Kerala, on May 21, 2018. (AFP)

If food, fruits, or vegetables become contaminated by body fluids of infected animals, this can then cause the virus to be transmitted to humans who consume the food, according to the CDC.

The “consumption of raw date palm sap or fruit that has been contaminated with saliva or urine from infected bats,” was one example shared by the CDC.

Humans climbing trees where “bats often roost” could also be another way of contracting the virus.

Most common human to human cases are see in “families and caregivers of NiV-infected patients, and in healthcare settings,” according to the CDC.

However, a study by the Johns Hopkins University published in the Science Daily journal said that this virus “occasionally” infects people and that when it is transmitted from person to person from a patient who is “older, male and/or has breathing difficulties.”

According to the WHO, Nipah virus has caused “only a few known outbreaks in Asia,” however, it “infects a wide range of animals and causes severe disease and death in people.”

The first outbreak happened in Malaysia and affected Singapore, the WHO said.

“Most human infections resulted from direct contact with sick pigs or their contaminated tissues. Transmission is thought to have occurred via unprotected exposure to secretions from the pigs, or unprotected contact with the tissue of a sick animal,” the organization said on a webpage dedicated to the virus. 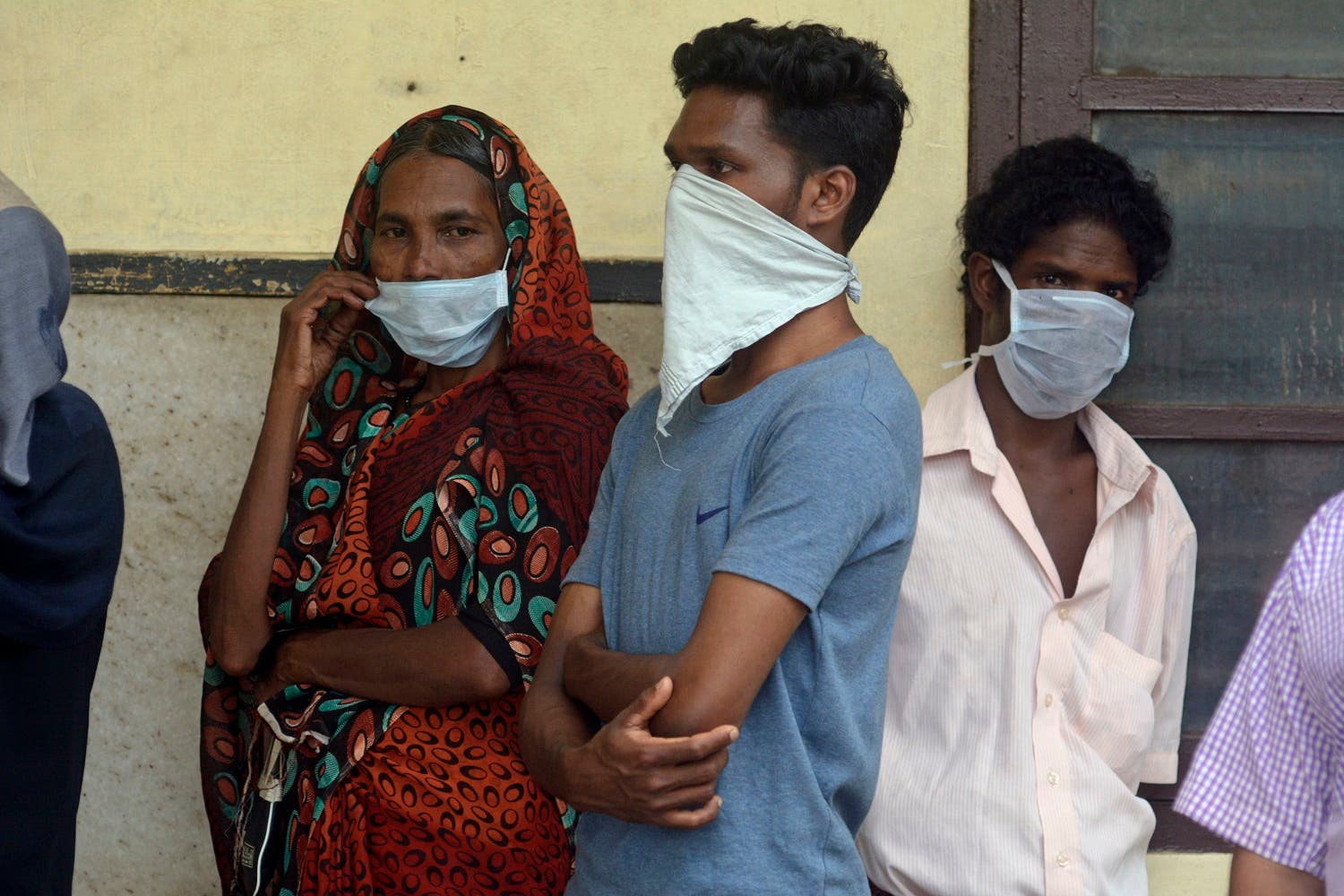 People in India stand outside a hospital wearing masks as a precautionary measure against the Nipah virus on May 21, 2018. (AP)

Following outbreaks happened in Bangladesh and India and were caused by the consumption of fruits or fruit products such as raw date palm juice “contaminated with urine or saliva from infected fruit bats,” the WHO ruled as “most likely” the source of infection.

When humans contract the Nipah virus, they can either have an asymptomatic infection, or will experience mild to deadly symptoms. The WHO listed the following as symptoms:

“This can be followed by dizziness, drowsiness, altered consciousness, and neurological signs that indicate acute encephalitis,” the WHO said.

The intubation period can range from 4 to 14 days but periods as long as 45 days has been reported, according to the organization.

Despite the fatality rate being an estimated 40-75 percent, “most people make a full recovery,” according to the WHO. The death rate can vary and depends on “surveillance and clinical management in affected areas.”

There are no drugs or vaccines that target the Nipah virus infection.